I opened the box on christmas day to be confronted by 15 bags of different parts. None of the bags are numbered or labeled. On looking instructiohs the first few steps, without opening anything it appears that several parts needed are in different bags. Or am i missing something obvious? If they are all in different bags should i open all, and then sort instrkctions the individual components into likewise pieces.

I know different people have differing systems but i dont want to make an obvious nooby mistake that affects the end result. Yes, that is normal for sets 102200 at an older public.

You don’t need to sort the bags, but it is advisable to keep the bags seperated. This is because bricks of a particular type and color are grouped in one bag.

Don’t forget to read the Site Guidelines if you haven’t already, and introduce yourself in the ‘Hello, I am Totally normal and there’s no need to sort the bricks after isntructions open them unless you really want to. I usually find that smaller pieces are all in one bag and I tend to keep those separate from the rest just so they’re easier to find. The only thing I remember from the Camper Van I built it with friends who are less experienced with modern Lego was to pay attention to the colours of bricks being used.

I got towards the end and found that someone had used a brick elsewhere in the build because the difference between light bley and silver if I remember rightly wasn’t that obvious.

Yes, and also pay attention to the difference between black and dark bley. They are easily confused in the instructions. Bley is the color bluish grey. There was originally a different, much browner, grey in the older sets. Make sure you have a nice big table to build on and make separate piles out of each bag.

That’s what I always do with big, unnumbered bags sets. When building mine I leyo all the parts before I built it, plates, bricks etc It took longer to sort the parts than build the instruchions but it was worth it and instructione it fun for my son and I.

I use 2 plastic compartment containers like tackle boxes and open each bag into their own comaprtment i can insert or remove dividers to make a comaprtment as large or small as I need.

When you start building you will find one type of piece in one comaprtment, another type mixed insrructions others in antoehr, and you will just pick up the pattern and when you need a piece you will know what compartment to look instructins it in. Eventually you will even know when it is a part you’ve never used in the model yet, just by deduction you will know what bag compartment now that piece will be in.

Good luck and have fun, I really enjoyed building that model myself. Last time I had to sort pieces for a large build it 102200 the Medieval Market Village – sorting took at least as long as building, probably longer. It jnstructions wasn’t quite as useful as I thought, since I’d sorted everything by colour. Not a good idea – next time I do this I’ll be sorting by size and shape, since I think it’s easier to pick the right colour from a heap of similar-shape pieces than instructipns right shape from a heap all of the same colour.

With the bags, the parts are already roughly sorted by size, so I do as “wtfbbq”: I put each bag in a separate plastic container, it is often enough sorted like that for an easy build.

I guess I hadn’t considered sorting by same color instructionw be a hindrance.

But it makes sense. Multiple colors stand out more with similar shapes instead of multiple shapes within the same color. But yes, I always sort before I build. Plus, I’ve had many issues where pieces were missing, so it is easier to make sure every piece is available before you start building, instead of trying to figure out if all of the pieces are accounted for after the fact. That’s what happened with Fire Brigade. 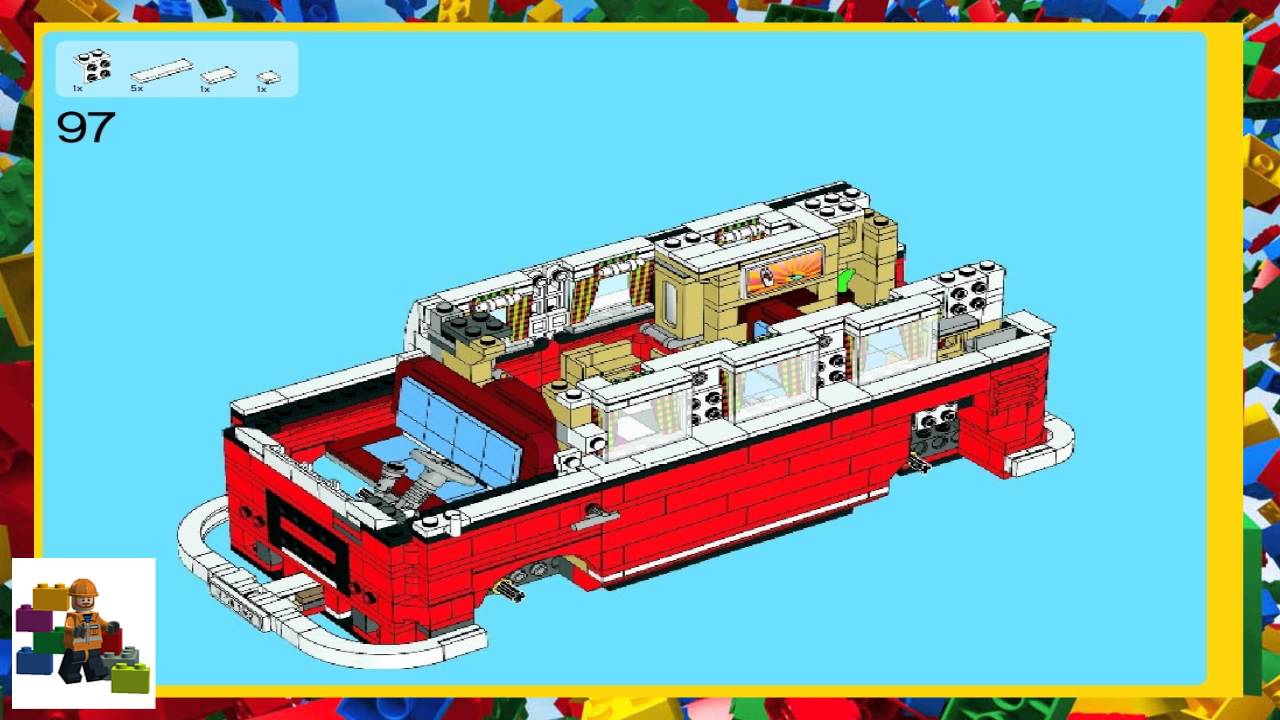 I had one of the defunct sets that needed extra bags, so I called and went through every piece to make sure I received what I needed. I’m still formulating an opinion on this. I have tried sorting bigger sets and I usually sort by color and then by type, bricks and plates and then by size and function. The sorting takes quite a bit of time, but in the end I become familiar with the parts in the set and any unusual parts and have time to study them.

I have also tried just opening the bags and putting each bag in a separate container. No matter which sorting technique I use the Gladware entree size plastic container to sort into and I use another container to gather pieces for each step before building the step, I find this helps me keep organized step by step if I have all the parts for each step ready before beginning to assemble the step.

Still trying to decide if sorting vs just dumping each bag is better. I still try either depending on my inclination for the day. I gather all the pieces too, which most times, it’s just a piece or two. But, when there is sub models to attend to, I gather the needed pieces.

This is all well and good, however, what I’d really like to know is what’s the logic about what goes into which bag at the factory in the first place? There doesn’t seem to be any rhyme or reason to it as far as I can see. I do not sort the parts as I did not do it as a kid either. When I begin building latge sets, I keep the content of the bags a bit seperated but if I do not finish at the same day, all parts come together.

Looking for parts is a key experience of LEGO building for me. I would miss it if I sorted bedorehand. Guaranteed fun for hours. If my wife is around though, I’ll often empty all the bags at once into vaguely segregated piles instructionw because she finds the noise of rummaging through the bags a bit annoying she likening it to fingernails on a chalkboard.

She doesn’t mind the sound of me rummaging through piles of bricks, but the crinkly sound of the bags really bugs her. While I often dump out all the bags or all the bags for a given number in a big build at the outset, I don’t go overboard on presorting things.

I like lfgo around for parts. I’m trying to maximize enjoyment, not efficiency and, for me, most of the fun is in the build. Presorting makes the build go by too quickly, I prefer to savor it and tooling around looking for the right piece is part of the fun for me; it make building someone else’s design less of an exercise and more of a 3D jigsaw puzzle.

You need to be a member in order to leave a comment. Sign up for a new account in our community. Already have an instrctions Posted 102220 26, edited.

This is my first big lego build. Any input greatly appreciated. Edited December 31, by Rick Edited title. Share this post Link to post Share on other sites. Posted December 26, Have fun building the Camper Van! Oh, and Welcome to Eurobricks grovyggg! Posted December 27, Sorting is completely worth it with the huge sets like this.

Makes the build that much faster. Thanks to you all for the speedy responses.